Cass Scenic Railroad State Park visitors will be able to hop aboard one of the nation’s oldest steam engines next fall and take a ride on a rail line that hasn’t been in operation for 30 years.

Durbin & Greenbrier Valley Railroad, which manages operations at Cass Scenic Railroad State Park, paid about $150,000 for the engine, which will be used to take park visitors on a 15-mile excursion from Cass to Durbin starting next fall.

The locomotive, which was built in 1926 by Baldwin Locomotive Works in Philadelphia is known as The Buffalo Creek & Gauley 2-8-0 No. 4. It made its last run in 1965, said Robert VanKamp, a board member of the Durbin & Greenbrier Valley Railroad, which took over operations at Cass last year.

“Basically that engine was really the last (working) steam engine in operation on a railroad in North America,” VanKamp said.

Also known by the nickname “Slobberface” for the way the engine sweats out large amounts of water, the engine then spent more than a decade giving scenic tours in Pennsylvania and Virginia. In 1978, it went to the North Carolina Transportation Museum, where it gave three-mile tours of the museum grounds.

The tours stopped in 2001 when the locomotive went in for maintenance work that was never finished. 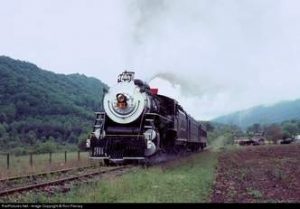 The engine needs to be serviced and reassembled. Workers at the Cass Shops will handle the work.

Durbin & Greenbrier paid the transportation museum’s foundation $150,000 for it, according to the News & Observer, the newspaper of Raleigh, N.C.

The engine will be returned to working condition at the Cass Shops and will then run on a reconstructed line from Cass to Durbin. VanKamp said the line was severely washed out in the 1985 floods.

“It’s 15 miles from Cass to Durbin and there are seven washouts,” VanKamp said. “One is a half-mile long. Every left hand curve was taken out.”

They hope to have the line and the engine ready in time for Slobberface’s 90th birthday, in September 2016.

“Our goal is to start on that engine in July. We’re hoping within 12 months and a good winter of work on it, we’ll have it back together and running for that September run,” he said.

“The reason why this is going to work for us is because Spencer Shops has spent a lot of time and money on that engine,” VanKamp said. “Everything is documented. Everything is known. The engine is apart right now and we have to just put it back together. We’re pretty confident that we can do that.”

The experts at Cass will handle all of the rebuilding, he said.

“One of the best places to get an engine rebuilt is the Cass Shops; they have a century of knowledge sitting in there,” he said. “All they do is rebuild steam engines.”

Durbin & Greenbrier President John Smith was in North Carolina this week to supervise as workers loaded the coal tender onto a truck bound for West Virginia.

“It’ll take a total of four truckloads to bring it all up,” he said.

He said the company was excited to improve visitors’ experiences at Cass.

The estimated cost of refurbishing the engine? $400,000. The cost to repair the rail line, however, will be considerably more.

“It’s a labor of love to do this,” VanKamp said. “It would be $15 million if we contracted it out, but luckily we have people that work for us that are track rebuilders.

“We’re hoping for some donations and hoping to get the general public involved. We might have it so they can donate a spike or a piece of rail, and we’ll let them be on the first train out of Cass and Durbin.”

Baldwin first built Slobberface for National Railway in Mexico, but later sold it to the Buffalo Creek & Gauley Railroad instead. It was primarily used to haul lumber and coal in Clay County.

As many locomotives were taken out of use, the No. 4 became a favorite subject of train enthusiasts and photographers, because they could get shots of the engine doing actual work.

Following the death of steam engines, museums and tourist destinations bought up equipment from all over the country.

“Back in the ’60s and ’70s things were being scrapped left and right,” VanKamp said. “Something that ran on Union Pacific would wind up sitting up in New York State.

“Stuff got really spread out all over the place,” he said.

But in more recent years, the trend has reversed and more museums are trying to repatriate rail equipment to their original homes, VanKamp said.

“It’s kind of a legacy type of thing,” he said. “The state has such a rich history in transportation with coal. The railroads are really what built West Virginia. 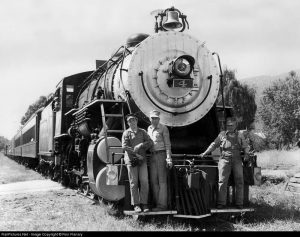 COURTESY RON FLANARY
The Buffalo Creek & Gauley 2-8-0 No. 4, also known by the nickname Slobberface, was used primarily to haul lumber and coal in Clay County from 1926 to 1965. It has been at the North Carolina Transportation Museum since 1978.

“We take a lot of pride that we are able to do this and accomplish it.”

Durbin & Greenbrier’s contract began at the start of 2015. It manages the scheduling of trains, staffing for train excursions and maintains the railroad and its equipment.

Cass operates 10 other locomotives at the park.