DURBIN — Sometimes it’s not so much about where you’re going. It’s about how you get there.

A trip, complete with overnight stay, aboard the Castaway Caboose is one of those times. 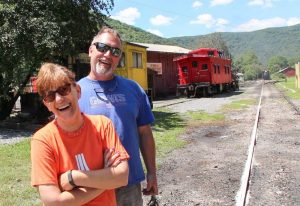 MARTA TANKERSLEY HAYS | Sunday Gazette-Mail Elaine (left) and Jack Harder just stepped off the Castaway Caboose after an overnight excursion where they enjoyed peace and quiet, unplugged from technology, with their daughter and her fiancé.

After all, there aren’t that many opportunities these days to board a coal-powered 1910 steam engine, chug five miles along a scenic track, and be left alone at the end of the line for a night or two in a caboose that was originally used as housing for railroad workers.

But ever since 2007, visitors have been coming to this tiny speck of a town situated in the northern part of Pocahontas County to do just that.

That’s when Mountain Rail Adventures, a division of the Durbin & Greenbrier Valley Railroad, teamed up with railroad enthusiasts Jay and Kathy East. The couple had rescued not one but two cabooses — a 1952 Wabash Railroad caboose they bought in 2004 from a junkyard, where it had been for 18 years, and a 1947 model they bought in 2007. 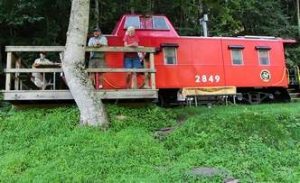 Brothers Paul (from left) and Bruce Smith and Paul’s wife, Cindy, take in the view of the Greenbrier River from the Castaway Caboose, where they spent two nights away from it all.

The historical integrity of the cabooses was maintained during the restoration and conversion process, East said. He pointed out the wood plank-paneled walls and ceilings, overhead handrails, original water storage tank, bunks and engineer’s desk — complete with shelving originally used to store and organize weigh bills for the railroad cars.

Boasting about 252 square feet of living space, the self-contained cabooses — equipped with a kitchen, onboard bathroom and shower facilities, and a propane grill — sleep up to six.

What he calls a simple RV on tracks is enjoyed by hundreds of vacationers every season who want to experience the historic accommodations, train ride and step back in time to a place where cellphones are silent and the soothing sounds of the Greenbrier River’s rippling waters lull you to sleep. 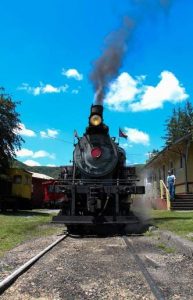 The Durbin Rocket, one of only three Climax steam locomotives still operational, is poised to push tourists along the 5-mile track to the end of the line, where the Castaway Caboose will be left for remote camping.

The Castaway Caboose is a much-coveted, sellout vacation destination. “It’s been a year and a half since we began trying to get in here,” said Jack Harder, of Bel Air, Maryland. Jack and his wife, Elaine, finally managed to get a reservation by calling in early January.

Well worth the wait, the Harders said, adding that they hope to take advantage of this and other Mountain Rail Adventures offerings next summer.

“It was a great experience filled with good family time — sitting around the campfire, talking with each other, listening to the river,” Jack Harder said. “It was really soothing.”

They were treated with sightings of local wildlife, too.

“We saw a bear on the way out, and there were some deer in the river right where we were,” he said.

“We were able to experience life firsthand,” said Elaine Harder, who, along with her husband, daughter and future son-in-law, had just stepped off the train and back into the 21st century.

“We spent some time playing cards, with actual cards,” she said. “It was a little throwback, which was very nice. I think being unplugged was the best thing about the experience.” 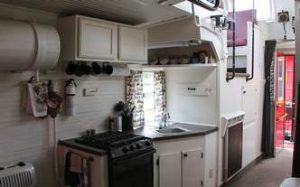 Elements of the original 1947 Wabash Railroad caboose are still evident in the Castaway Caboose, including the elevated seats in the cupola that double as bunks on the right, the wood plank paneled walls and ceiling and the water storage tank (at left).

While the cabooses have a solar panel and marine generator to provide limited access to electricity, they don’t have air conditioning. The only truly modern form of entertainment provided is a DVD player and a box full of movies.

“There was a radio, but there was nothing — nothing — to hear,” Elaine Harder said. “It was a step back in time.”

That’s because the railroad is located close to the Green Bank National Radio Astronomy Observatory, designated a National Radio Quiet Zone by the U.S. government, meaning only very low signal strength is allowed for broadcasters, and there is no cellphone service. 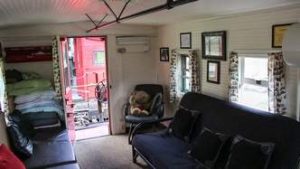 Except for food and clothing, the Castaway Caboose is equipped with everything campers need for an overnight stay in the wilderness. Note the metal handrails on the ceiling, a safety feature from the original Wabash Railroad caboose. Through the door, you can see the adjacent rail car.

Mountain Rail Adventures has an average of 90,000 riders a year among its three depot locations in Cass, Durbin and Elkins, spokesman Chase Gunnoe said. The trains include the New Tygart Flyer, a vintage diesel-powered passenger train boasting a restored 1929 Pullman Car; the Mountain Explorer Dinner Train; the Cheat Mountain Salamander; the Cass Scenic Railroad’s collection of six Shay locomotives, one Heisler and one Climax, engineered to pull heavy loads of lumber; and the Durbin Rocket, the vintage steam locomotive that pulls the Castaway Caboose.

The Durbin & Greenbrier Railroad plays a vital role in promoting and preserving railroad history and allows passengers to experience bygone eras in many different venues including Mystery Murder Dinners and a Wild West Weekend where the train is ambushed and robbed by a band of horse-riding outlaws. 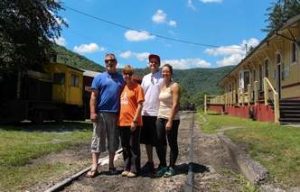 Returning from a night aboard the Castaway Caboose, Jack (from left) and Elaine Harder, their future son-in-law, Nick Ackerman, and daughter Ashley Harder, agreed the best thing about the excursion was being unplugged.

The Durbin Rocket, a Climax steam engine built in Pennsylvania more than 100 years ago, is only one of three still in existence. It has a top speed of about 15 miles per hour, said engineer and mechanic Jim Bennett. A team of men is needed to keep it up and running, lubricating the moving parts, siphoning water from the creek along the way, and shoveling coal into the furnace.

The chug-chug-chug of the pistons is deceptive at first, because the ride is fairly smooth once all the slack is taken up between the cars at the onset of motion.

Links to the past 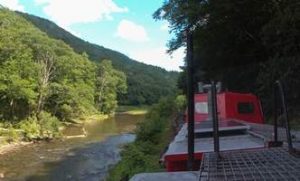 Deep in the wilderness, the Durbin Rocket allows tourists to experience bygone days when the railroads were king.

Departing the station for their own Castaway Caboose adventure, Cindy Smith, her husband, Paul, and his brother Bruce, said that coming from a family of railroaders, they “just had to do” this.

They learned of the Castaway Caboose last year when they brought their RV down from northwestern Pennsylvania — “40 miles from where the Durbin Rocket was manufactured” — to visit the Cass Scenic Railroad, Cindy Smith said.

He said he is interested in “steam locomotives in general and this one in particular because it is a geared locomotive and one of the few left on the face of the earth still operating.”

The Smiths plan to use their two-night stay on the Castaway Caboose as a time to “hide for a few days next to the river,” Bruce Smith said.

“And watch the train come down the tracks with passengers tomorrow,” Paul Smith added. 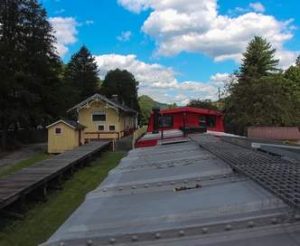 From elevated seats in the Castaway Caboose’s cupola, campers can view the front of the train and the Durbin Depot.

The trio are accustomed to outdoor activities and plan to backpack the seven miles from their camp at the end of the line over dilapidated tracks to Cass.

“Seven miles one way makes for a pretty long day,” Paul Smith said, laughing. “So we may just sit and read.”

For more information on Mountain Rail Adventures and special events for the remainder of the season, visit www.mountainrailwv.com/ or visit their Facebook page at www.facebook.com/MountainRail.