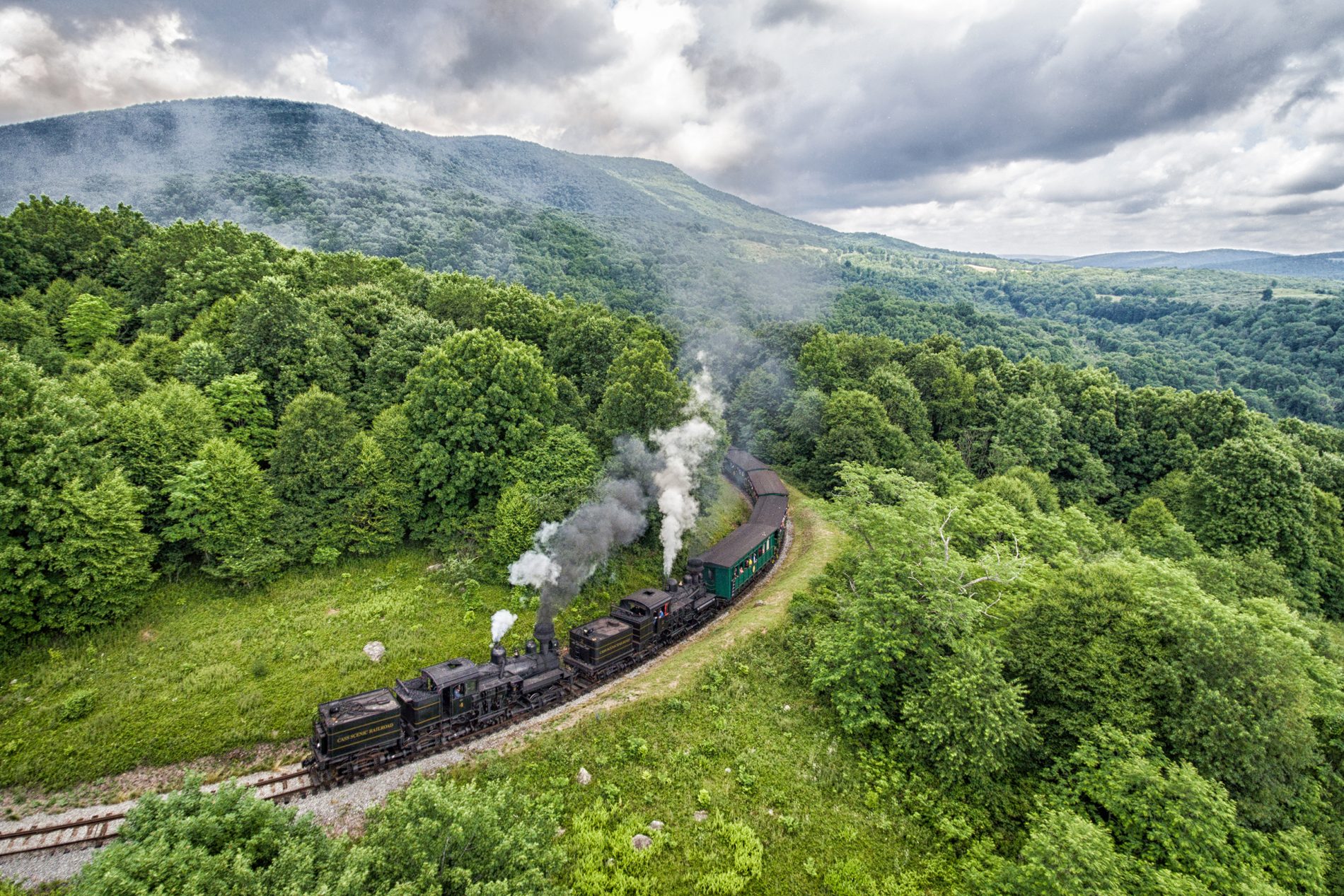 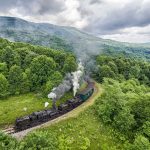 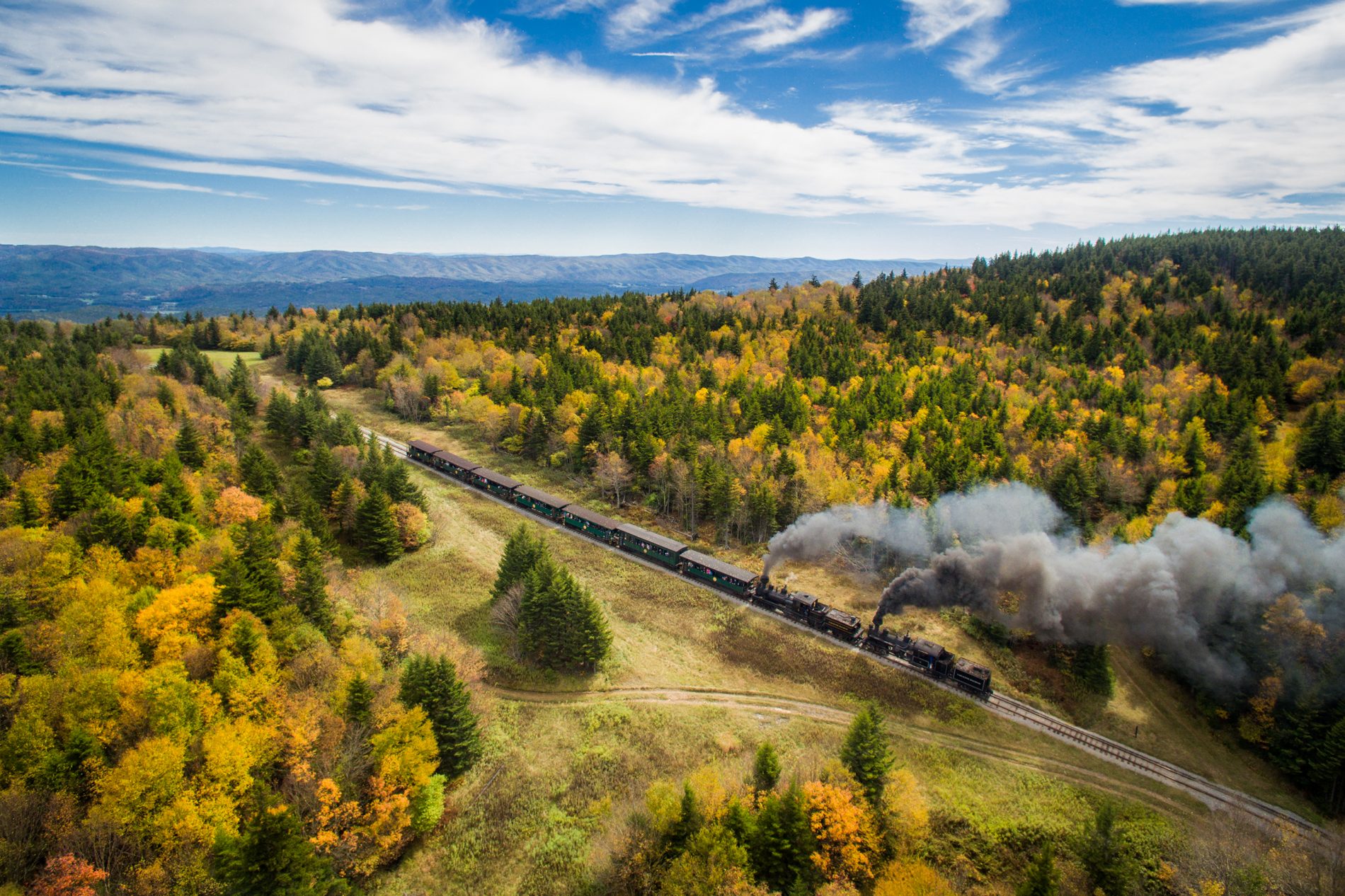 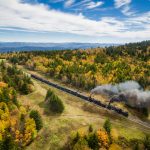 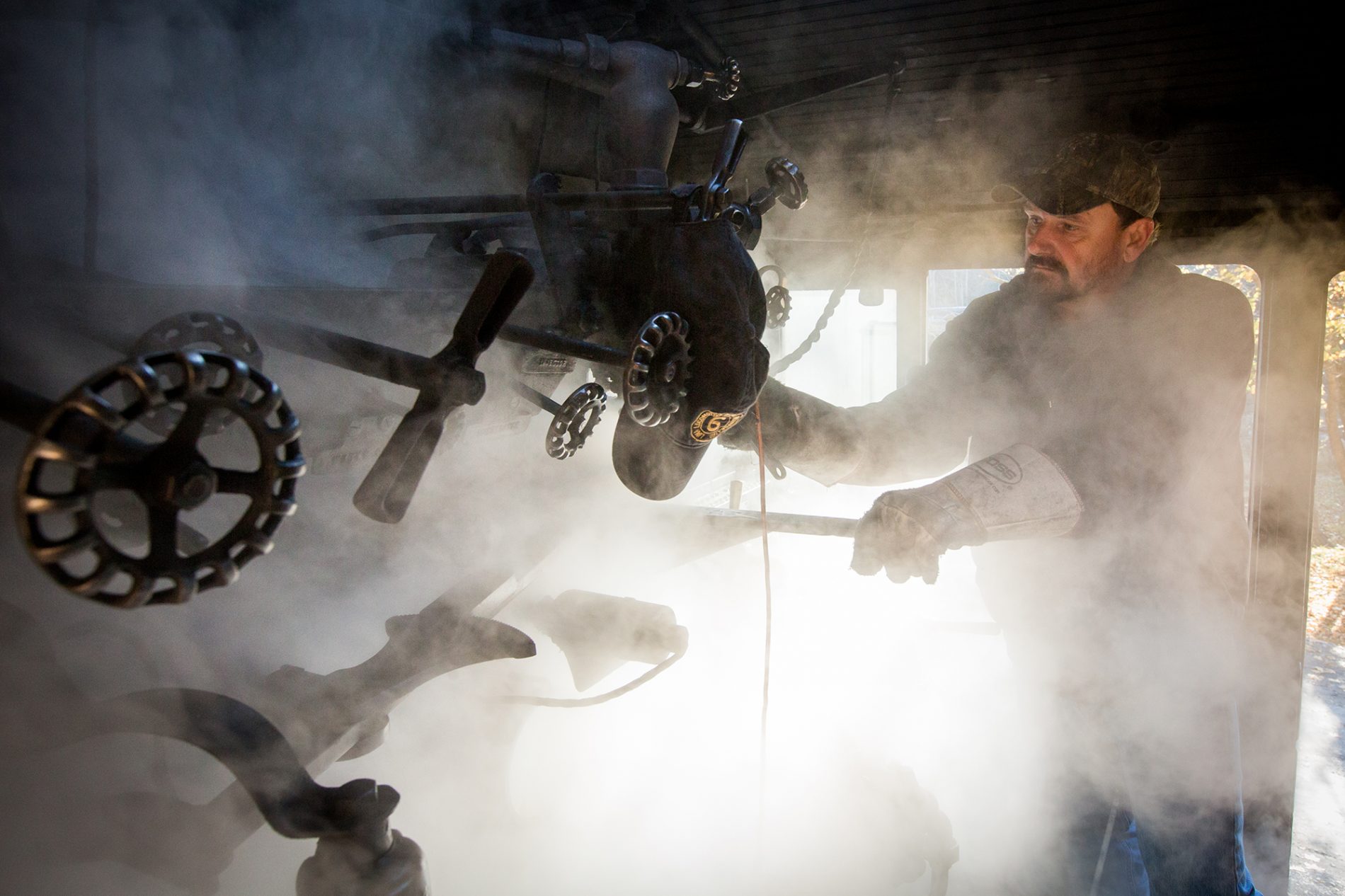 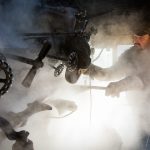 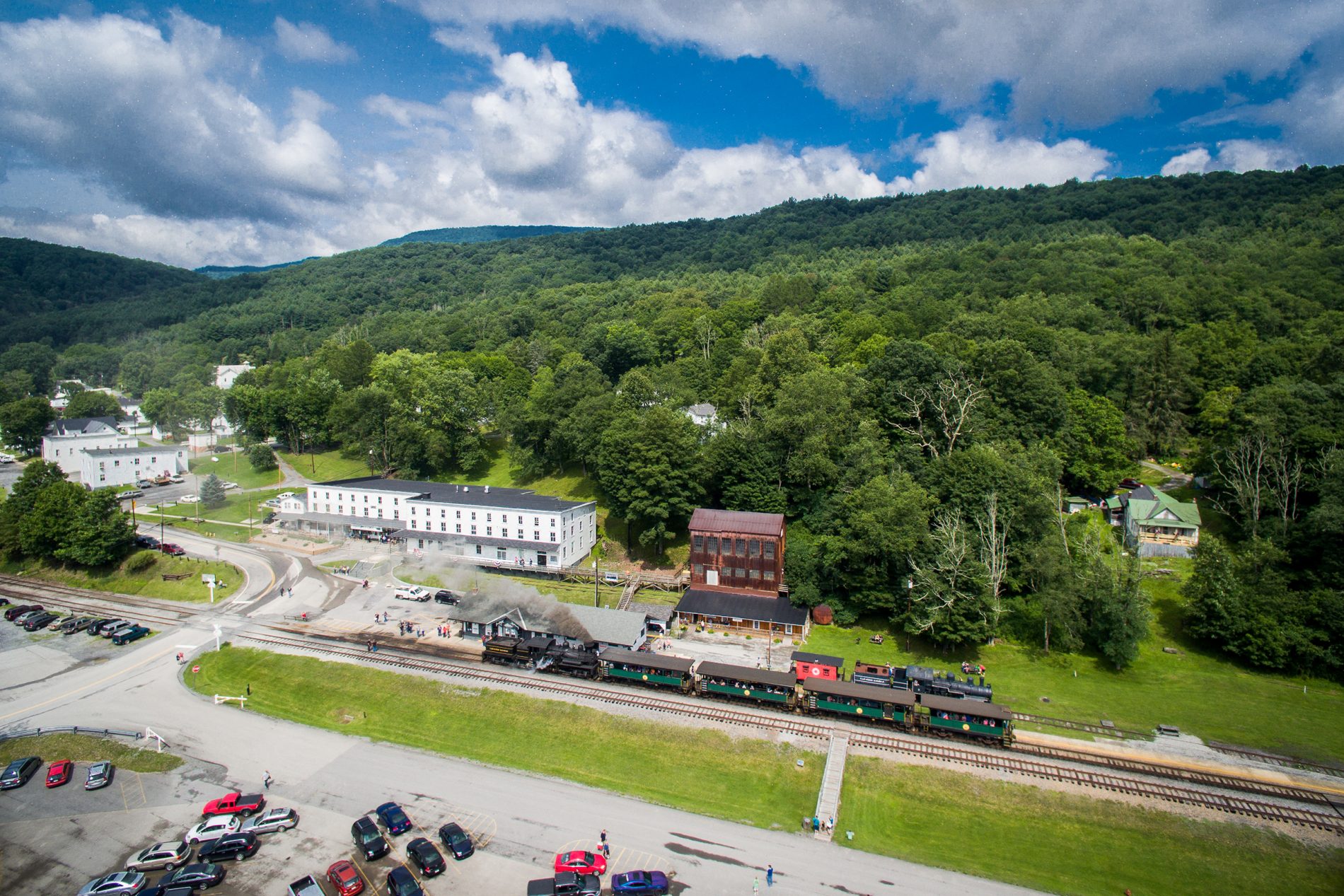 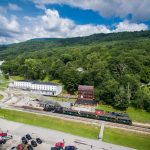 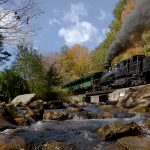 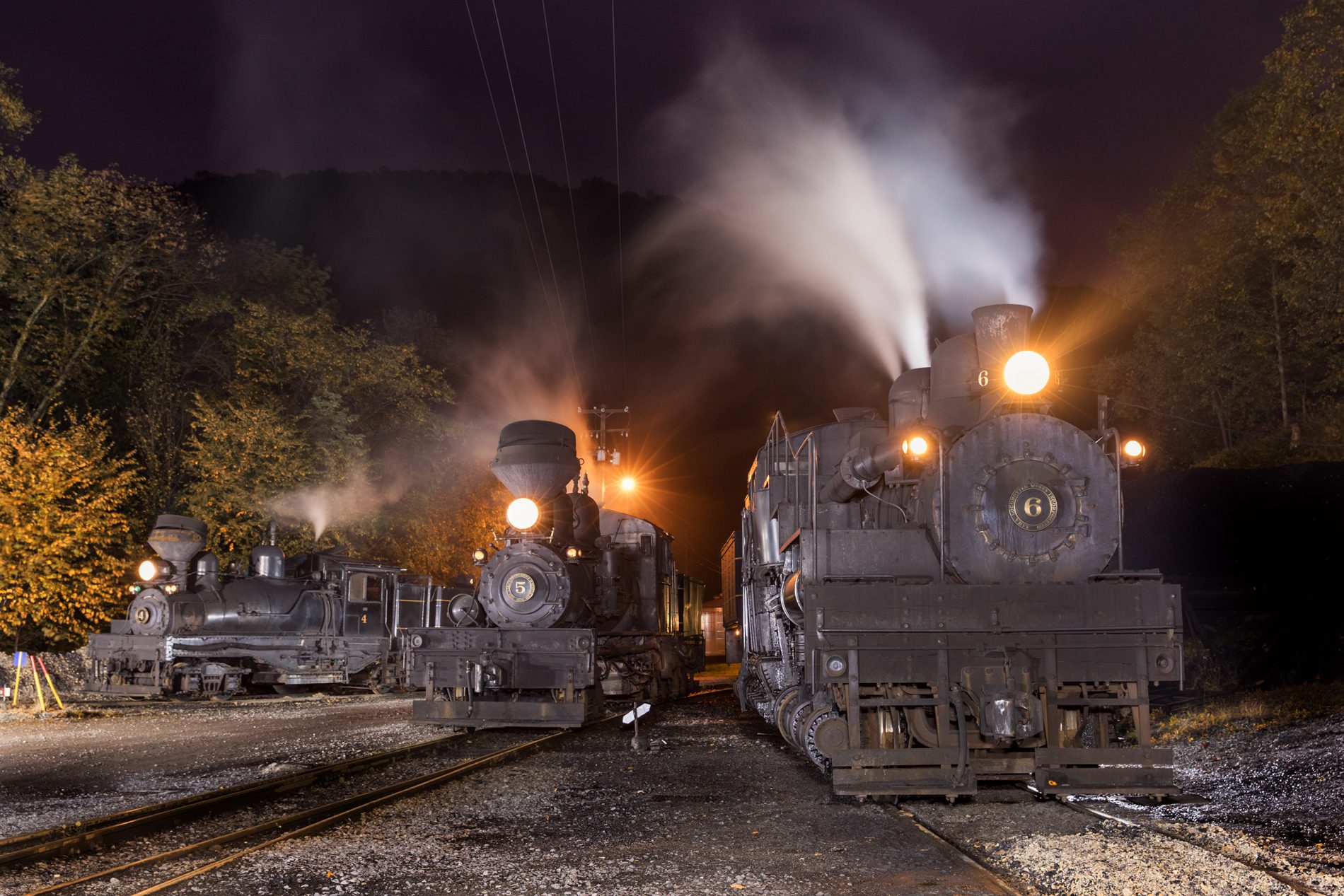 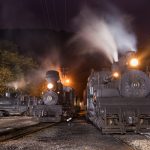 Historic. Authentic. A ride into yesterday

A RIDE on the Cass Scenic Railroad is a thrilling experience for young and old who may never have seen a steam locomotive. Both are filled with a sense of excitement and anticipation as they approach the old Cass Depot to get tickets from the Agent for this once-in-a-lifetime adventure. Aboarrrrd”! With a clang, Clang, CLANG of the bell and CHUG, Chug, chug of pistons, the train lurches forward to begin a memorable, spine tingling ride.

STEEL wheels clickety-click in increasing tempo as the train picks up speed on the same standard gauge rails over which more than ONE BILLION board feet of lumber and an equal volume of pulpwood were shipped during the early part of the century, testimony to the vastness and incalculable wealth of this once virgin timber stand.

From the open observation coaches, passengers may drink in the unfolding panorama of remote and beautiful West Virginia scenery, or catch an occasional glimpse of wildlife scurrying away from the huffing, puffing iron monsters. POWERFUL engines easily push the cars up grades averaging four to five per cent, and at times an astonishing 10%. Two of the few remaining switchbacks anywhere in the US afford added excitement on the road, one of the highest non-cog railroads east of the Rocky Mountains.

CONCEIVED by Michigan inventor Ephriam Shay, the Shay Engine was designed for the roughest mountain duty under the worst possible conditions. In the absence of streams to float logs to the mill, loggers had to haul incredibly heavy loads out of the mountains by rail-on steep grades, sharp curves and hastily laid roadbeds where power rather than speed was important. Lumbermen instantly recognized the Shays as the answer to their problems and bought them by the hundreds.

UNLIKE standard steam engines, every wheel of the Shay engine and tender is a drive wheel-no wheel can spin unless they all spin-giving the Shays tremendous traction. Vertical cylinders and the crankshaft make multiple power strokes per revolution of the gear driven wheels for a smooth, even flow of power to negotiate steep grades with heavy loads effortlessly. 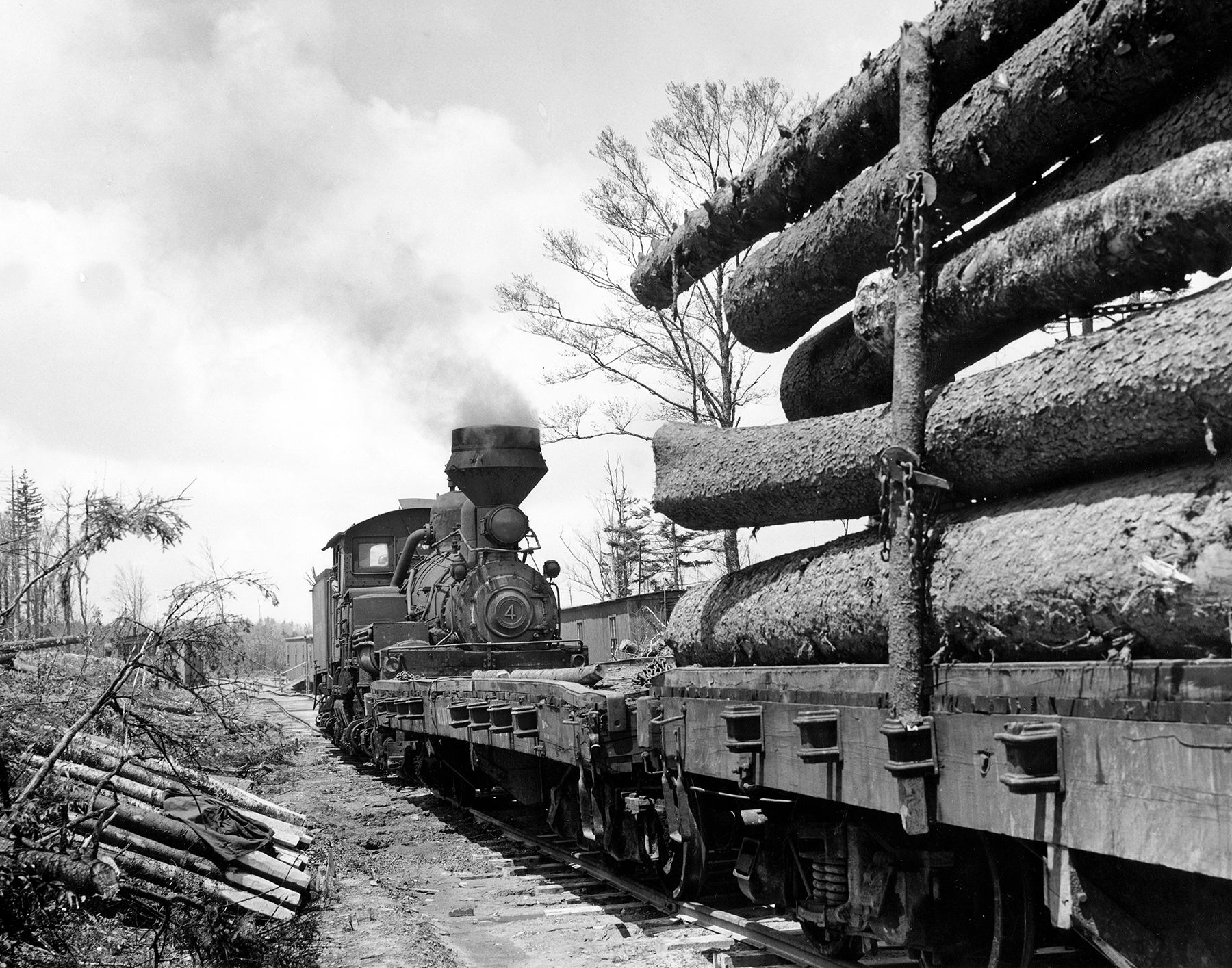 OF THE 2,761 Shays built by the Lima (Ohio) Locomotive Works beginning in 1880, the five at Cass are among the few remaining anywhere, as priceless and almost unique relics of those old lumbering days. Rail buffs are amazed to see the complete machine shop at Cass capable of duplicating and rebuilding almost any part of the engines. Since the average life of an engine is about 34 years, these Shays would have ceased operating years ago without such excellent care.

Ride To The Top!

BALD KNOB-The long haul of 11 miles to Bald Knob takes about four and a half hours for the 22-mile round trip. Panoramas of the lofty Appalachians become more beautiful as the train climbs higher and higher. Passengers suddenly realize they are entering a completely different world, mainly because of the change in trees, flowers and atmosphere. By climbing the 2,390 feet from Cass (2452-feet) to Bald Knob (4842-feet) on Back Allegheny Mountain and second highest point in West Virginia, passengers have made the equivalent to an 800 mile trip to Canada in climate because of the higher altitude. Here are found spruce trees, snowshoe hares and other plants and animals typical in the far north. The rustic overlook affords one of the most awesome, overwhelming spectacles in the cast. Dwarfed by distance and almost lost in the vastness of the panorama is the giant Robert C. Byrd Green Bank Telescope, the world’s largest fully steerable radio telescope, at the Green Bank Observatory in the valley near the foot of the mountain. A remarkable contrast between the wilderness at Bald Knob and today’s space-age facilities!

WHITTAKER STATION-The shorter ride of four miles to Whittaker Station takes two hours for the eight-mile round trip. Passing the water tower and machine shop, the railroad begins to climb lower slopes of Cheat Mountain along picturesque Leatherbark Creek. The train then zigzags through two switchbacks, the engines alternately pushing then pulling passenger cars because the grade is so steep. After passing the entrance to Cass Cave, the railroad levels off for the stop at Whittaker Station, surrounded by green meadows and fine views of the countryside. There is a cool, shady picnic grove with tables where excursionists may rest and enjoy the scenery. A ride on the Cass Scenic Railroad is an unforgettable experience for the whole family. Schedule a trip soon. 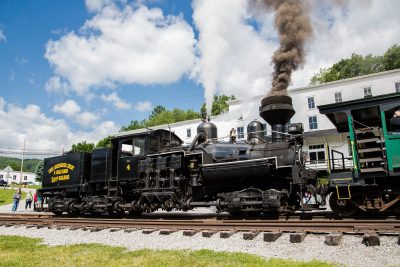